At one point or another, all laptop users find themselves pondering the same question: is it bad to leave your laptop plugged in all the time?

Turns out, the answer isn’t entirely straightforward. So let’s take a look

There are two main types of batteries used in laptops: lithium-ion and lithium-polymer. Although they are different technologies, they function in broadly the same way, generating power through the movement of electrons.

This constant flow is also needed to help keep the battery healthy.

For both types of batteries, the following statements are true (at least as far as modern laptops are concerned):

A battery cannot be overcharged. There’s no danger of overcharging a battery if you leave it plugged in all the time. As soon as it hits 100 percent, it will cease charging and won’t start again until the voltage falls below a certain level.
Fully discharging a battery will damage it. Allowing the battery to become completely empty for an extended period can put it into a deep discharge state. This can be fatal—you might never be able to charge it again. (You can try these methods to jump-start a dead laptop battery.)

So, based on this, do we conclude that you should leave your laptop plugged in all the time? Not quite.
Things That Damage Lithium Batteries

The truth about lithium-based batteries is that they are inherently unstable. They begin to lose capacity from the moment they are produced, and numerous factors hasten their decline. These include:

Charge/discharge cycles. Every battery has a finite number of times it can be charged and discharged.
Voltage level. The higher the charge level (measured in volts per cell), the shorter the battery’s life.
High temperature, over 30 degrees celsius. This can cause irreparable damage.

The last two are the ones that we’re most concerned with here. A comprehensive study by Battery University highlights how voltage levels and high temperatures will shorten the life of a battery in isolation and even more when they combine.
Charge or Voltage Level

Lithium-ion batteries charge to 4.20 volts per cell, which amounts to 100 percent of its capacity. At this level, the battery will have a lifespan of 300-500 discharge cycles.

Unfortunately, at this level, the battery is only around 60 percent charged. The runtime will be a little more than half of a fully charged battery.
Heat

And then there’s heat. High temperatures, typically classified as being over 30 degrees Celsius, will shorten the life of a battery irrespective of any other factors. Simply leaving your laptop in your car on a summer afternoon is a bad idea. 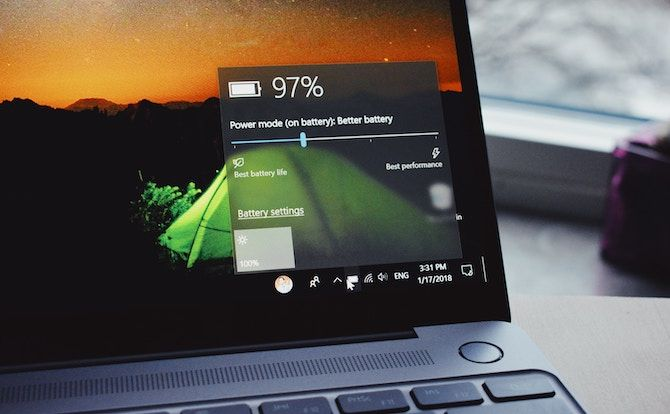 How to Customize the Desktop Theme

How to Set Up Icon Piles and Grids